My low mileage 1978 Eldorado Biarritz ran super nice. It idled like a clockwork but it sometimes had one problem:
The car would have a slight hesitation for one or two seconds when driving away from standing still and idling. The hesitation was not present at any higher speeds - only when starting from standing still, no matter how hard I hit the pedal.
Once the car was rolling, it ran perfectly. 2 or 3 times the engine even stalled in the past.
That's why I suspected the accelerator pump.
Replacing it is not too difficult. You basically only need a rebuild kit and remove the carburetor from the car. Then you have to remove 8 screws to take the top off and remove 2 linkages. I'm not a carburetor expert at all, but luckily my friends ,who did the job before, helped me, but it really is not difficult at all. I found some great how-to video on YouTube on how the Quadrajets are taken apart and back together - They have some very informative videos on their youtube channel - here is one of them: 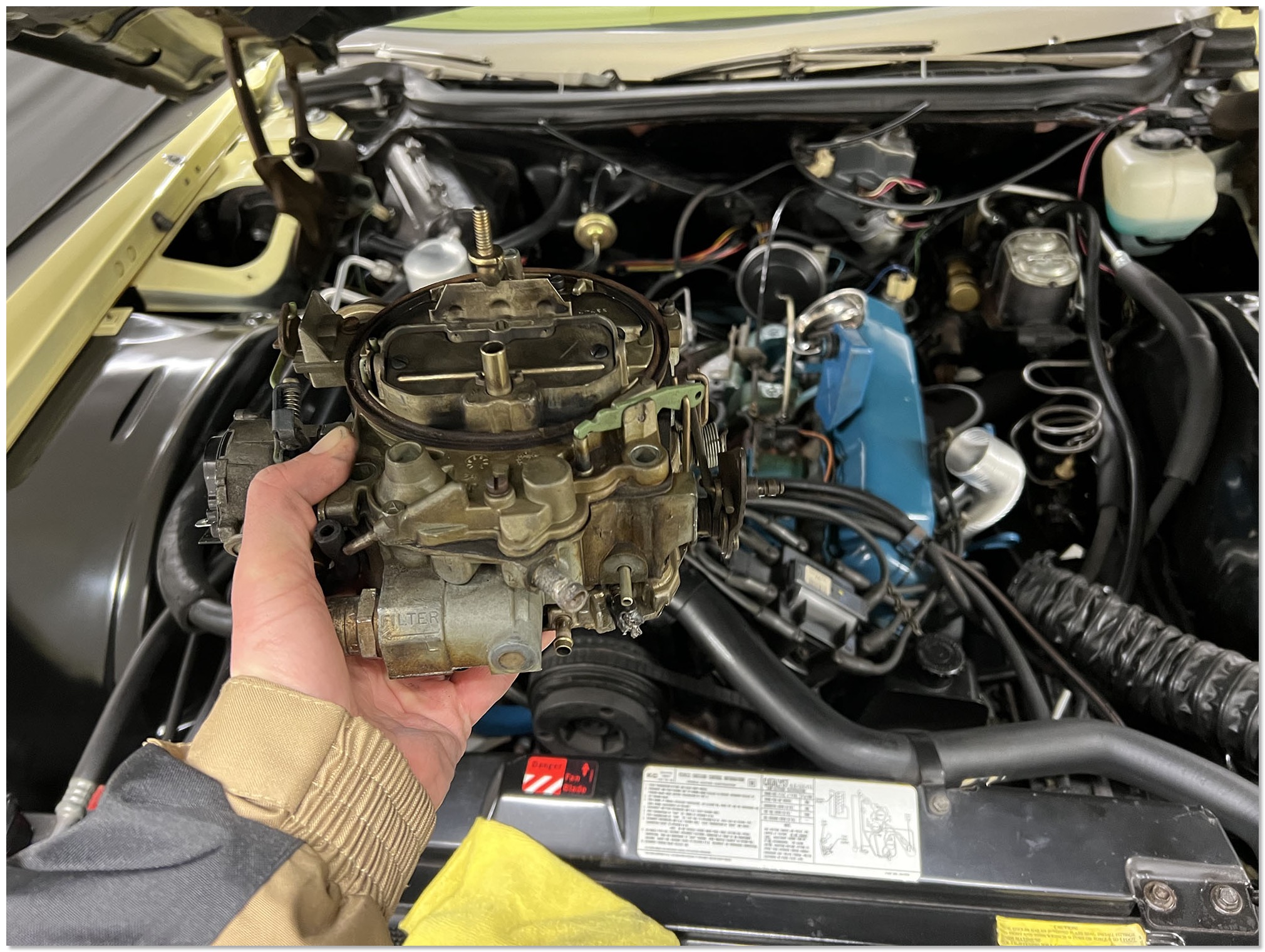 The Quadrajet after removal. 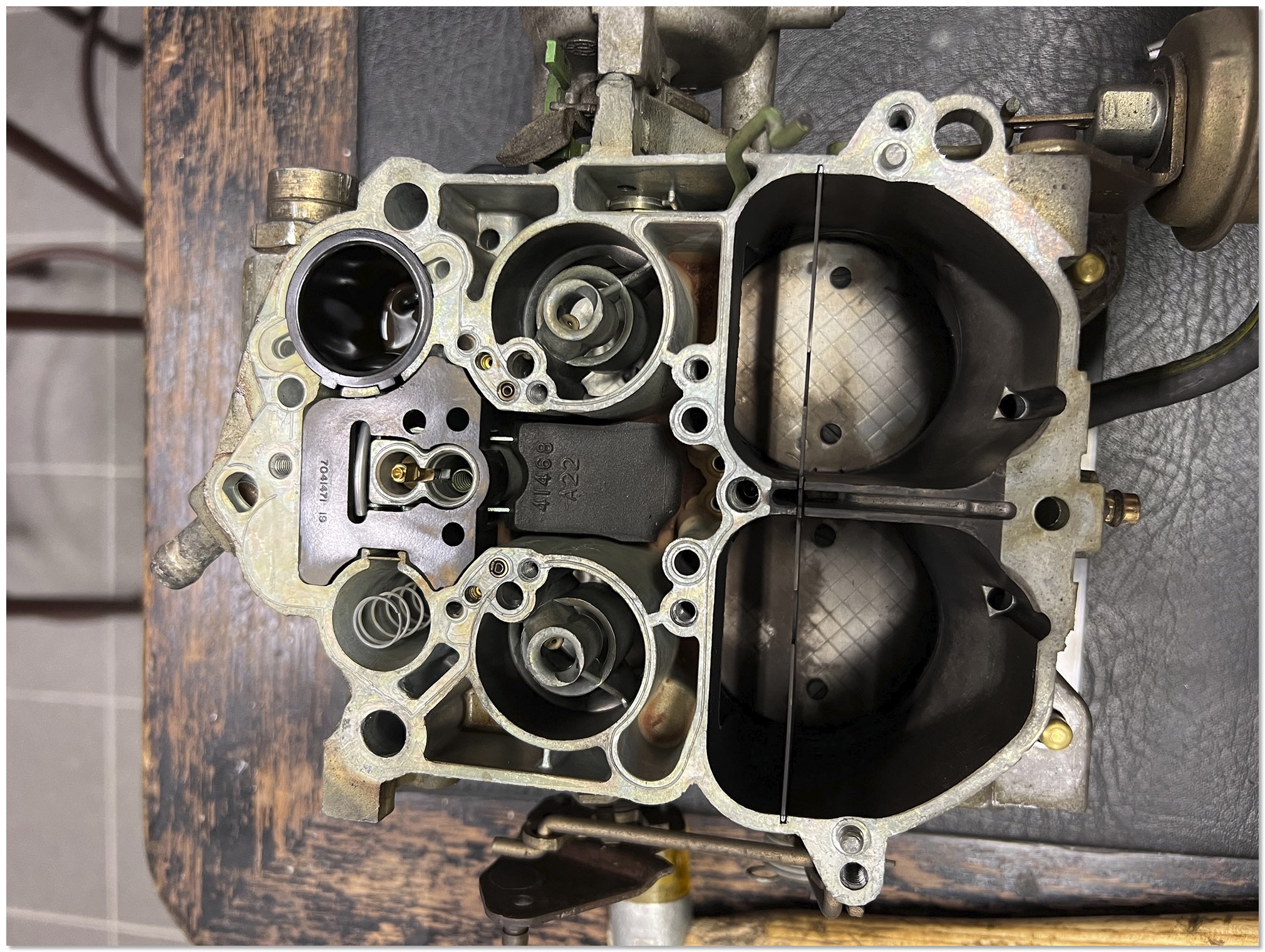 The Quadrajet with the top removed The accelerator pump on the right side 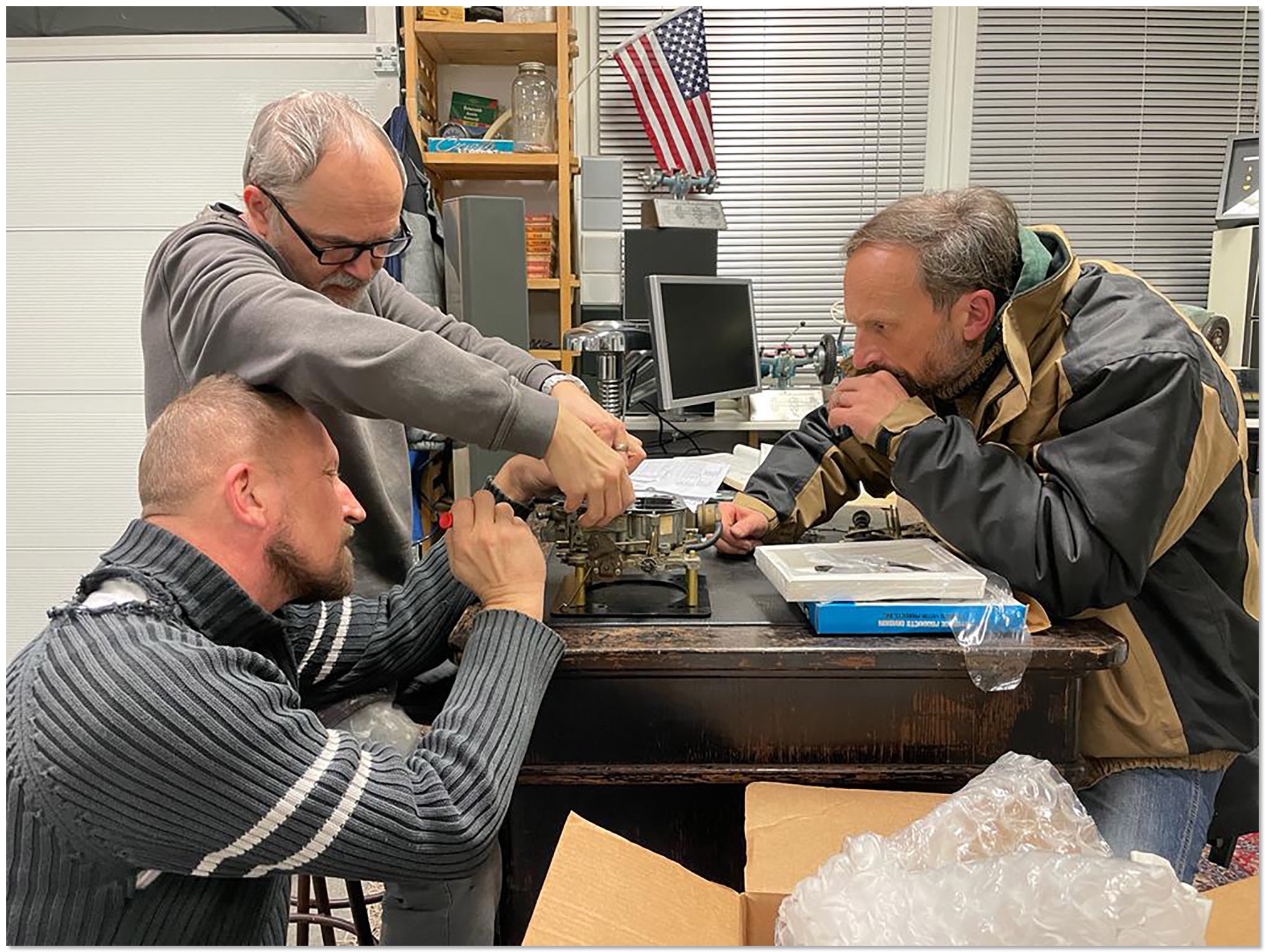 My friends Steve and Lucky helped a lot. Thanks my friends! We did all the work in Luckys fantastic garage and shop. 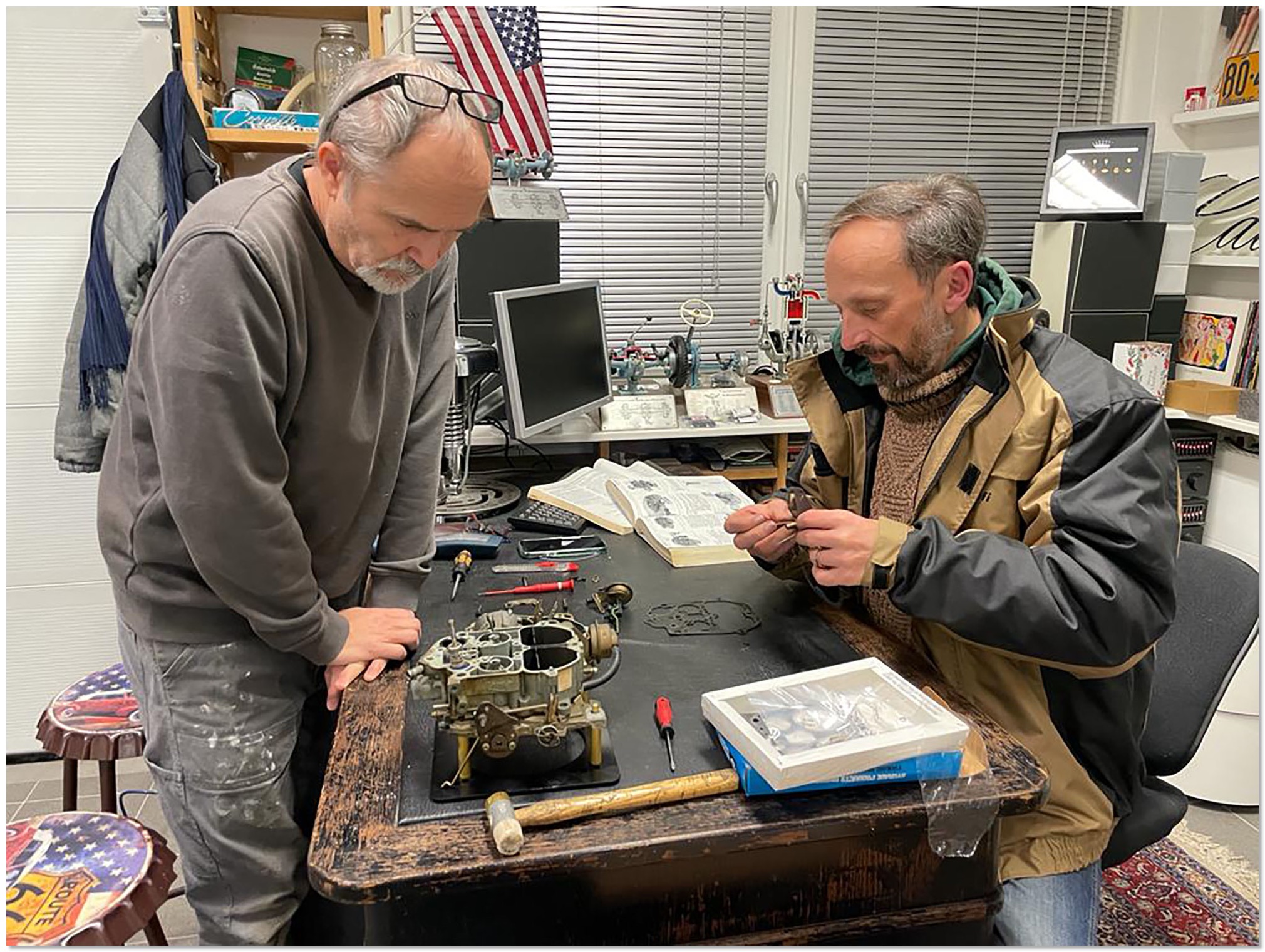 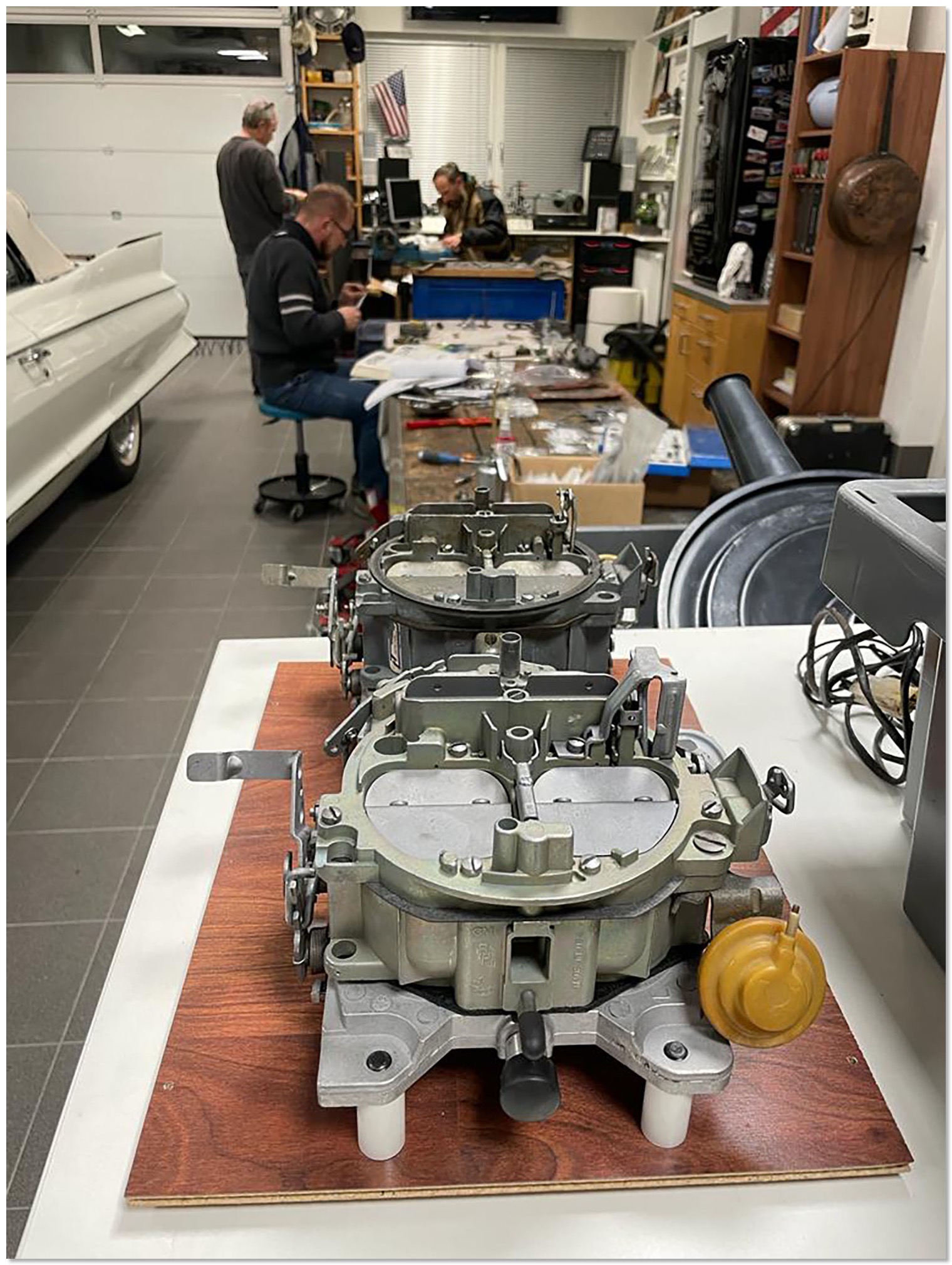 We had "Carburetor Monday" as everybody was working on their carburetors.

We replaced the pump rubber and put everything back together. The carburetor looked very clean inside with only minor deposits, so we left everything else as it was.
I can't wait to install it back into the car and hope the problem is fixed - did not do a full rebuild as it is still very clean and nice inside. Only installed new rubber on the pump and new top gaskets.

UPDATE: (12/20/2022)
Today I managed to install the carburetor back into the car. It idles beautifully again and started right up. Unfortunately there was a snow storm outside So I could only drive it a few feet. So far so good - seems like the problem with hesitation is gone, but I will have to do a real test drive to make sure it works as it should.

When I got my 1966 Cadillac back the choke did no longer work. The hot air choke mechanism on the Carter AFB carb was stuck open and thats why the previous owner removed the choke linkage, which would close the primaries when the car was cold.
I removed the choke housing from the car and it was completely stuck and did not move at all. Both the lever and the counter weight were completely frozen up although everything inside the housing looked pretty clean.

First I tried anti seize oil which did not change anything. Then I soaked the unit in a parts cleaner solution over night which did not free it up either. The next day I soaked it in a rust removing solution which did not help either. I then put it in a can of transmission fluid for a while.
In-between I always gently tried to move it and suddenly it freed up and now works perfectly smooth again. I put the carburetor back together and now the car is very easy to start again - even on a very cold day.

The choke after repair. 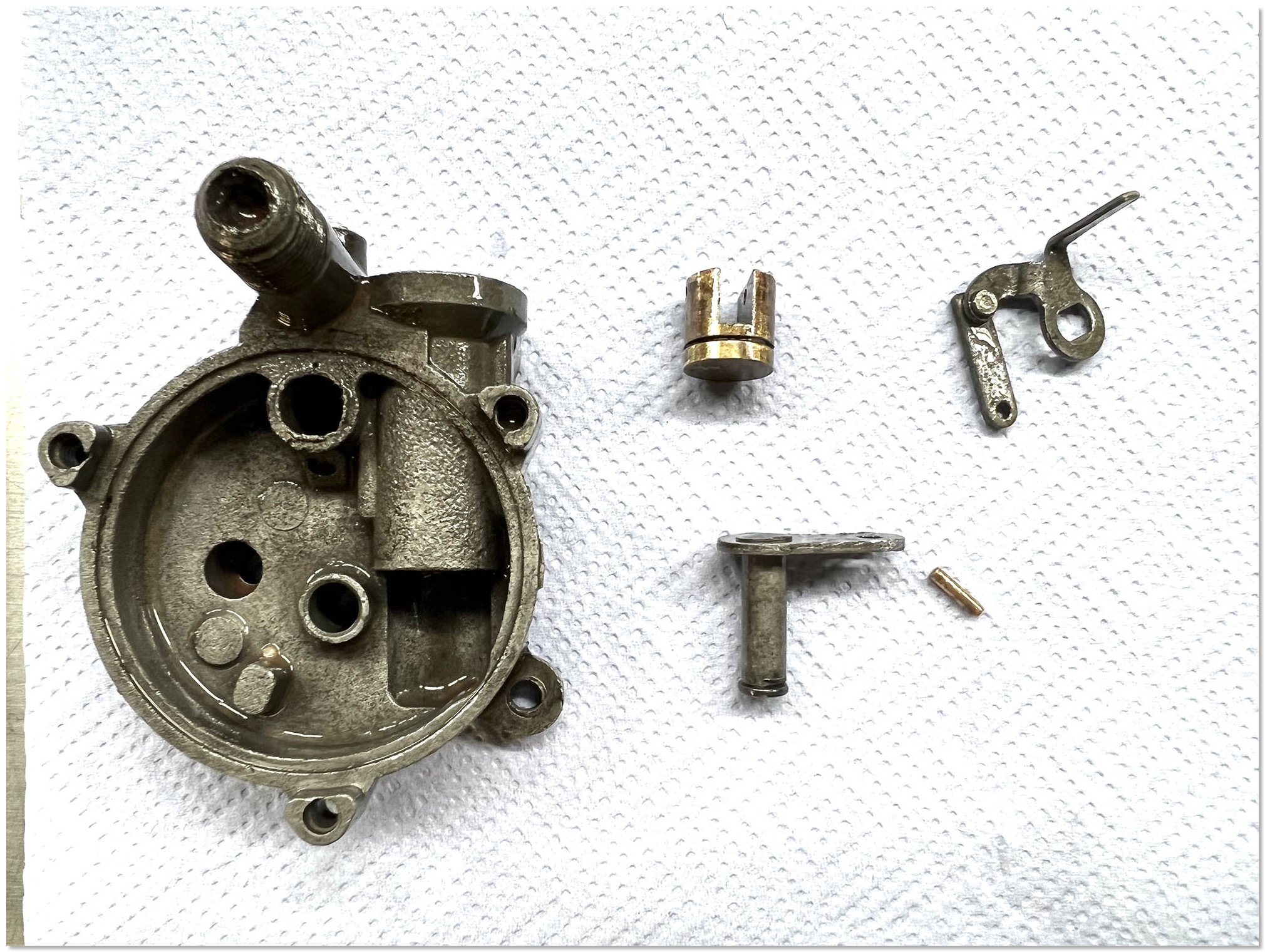 The choke mechanism disassembled for repair after I managed to free it up. I installed a rebuilt carburetor from www.carburetorcenter.com into my 1967 Eldorado today. It suffered from bad idle when fully warmed up at low RPM. It had a problem with the secondaries not closing properly and was worn out a bit. It's an easy install. The 1967 Eldorado uses a unique linkage for the transmission switch, which is a one year only item. Take good care of yours!
The Eldorado now purrs like a kitten again with its new Quadrajet. I now have two more carburetors to do - the 1966 has a stuck choke and the 1978 needs a new accelerator pump.... The video is also available on YouTube in 4K HDR quality...

I took a short video of the installation process. 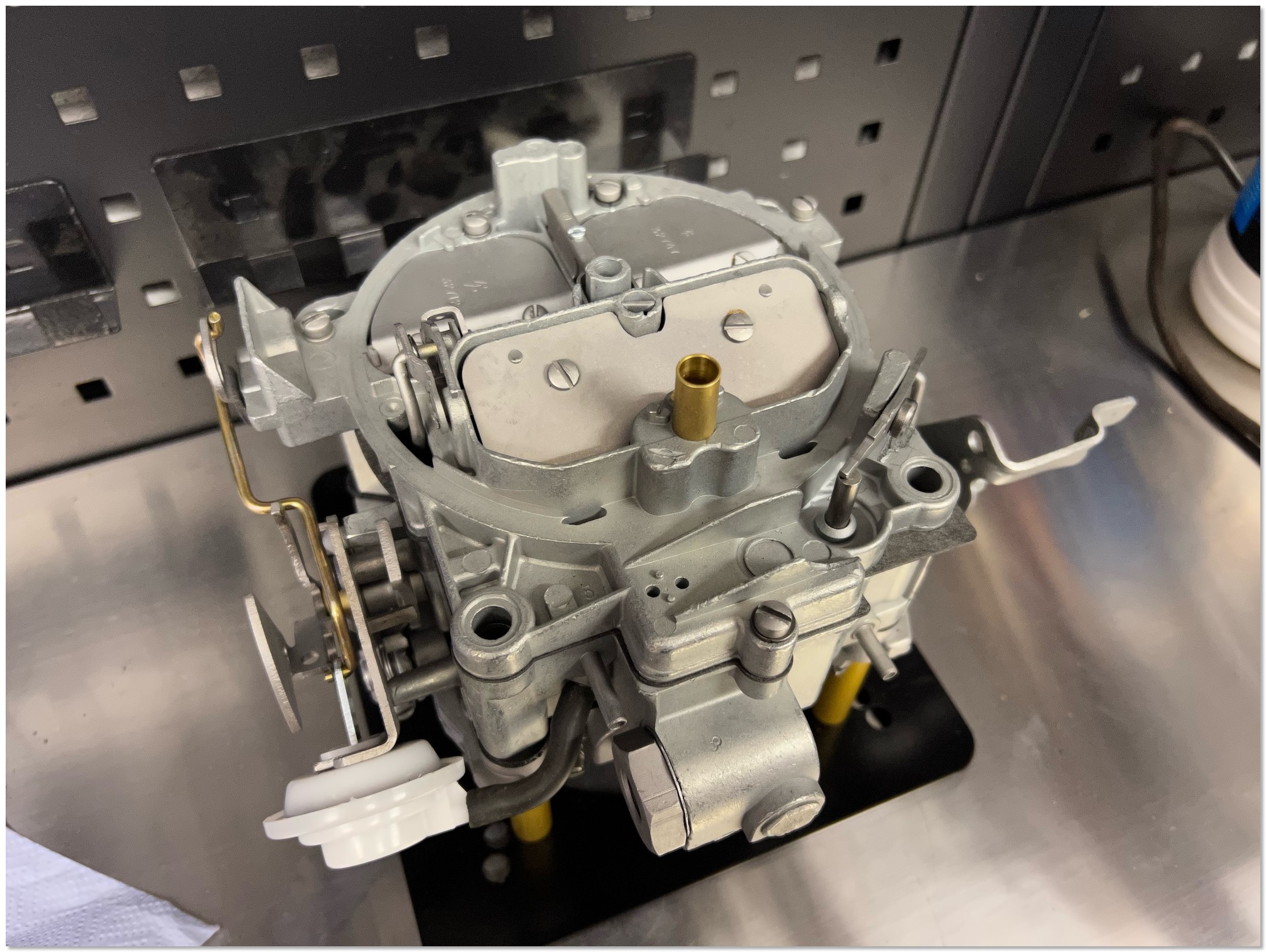 The rebuilt Quadrajet on the bench. The old original 1967 Eldorado Quadrajet - this is the non California version. Here is our annual Season's Greeting card. This year with the 1966 Cadillac and my lovely family. I am planning to clean up the undercarriage of my 66 Coupe deVille during the long winter months. The car is in fantastic condition. There is still the original undercoating on the car. In areas where it was not applied there is some slight surface rust which I would like to remove and conserve everything.

To make the car perfect again I will also dry ice blast the undercarriage and totally clean it up like I did on my 74 and the Roadmaster to preserve it as good as possible.
Today I started to brush some of the surface rust away. After that I will apply some rust remover.
I took some "before" pictures and a video. It will be a long and dirty job…

PUTTING THE CARS TO SLEEP

2021has been a very busy year for me in my job, but I am very glad that I had so much work and great clients in times like these.
I have to admit that my car activities were almost non existent until a week before the Cadillac BIG Meet.
I did not even drive all of my cars this year - one did not even leave the garage… BUT… CONTINUE READING BY CLICKING HERE 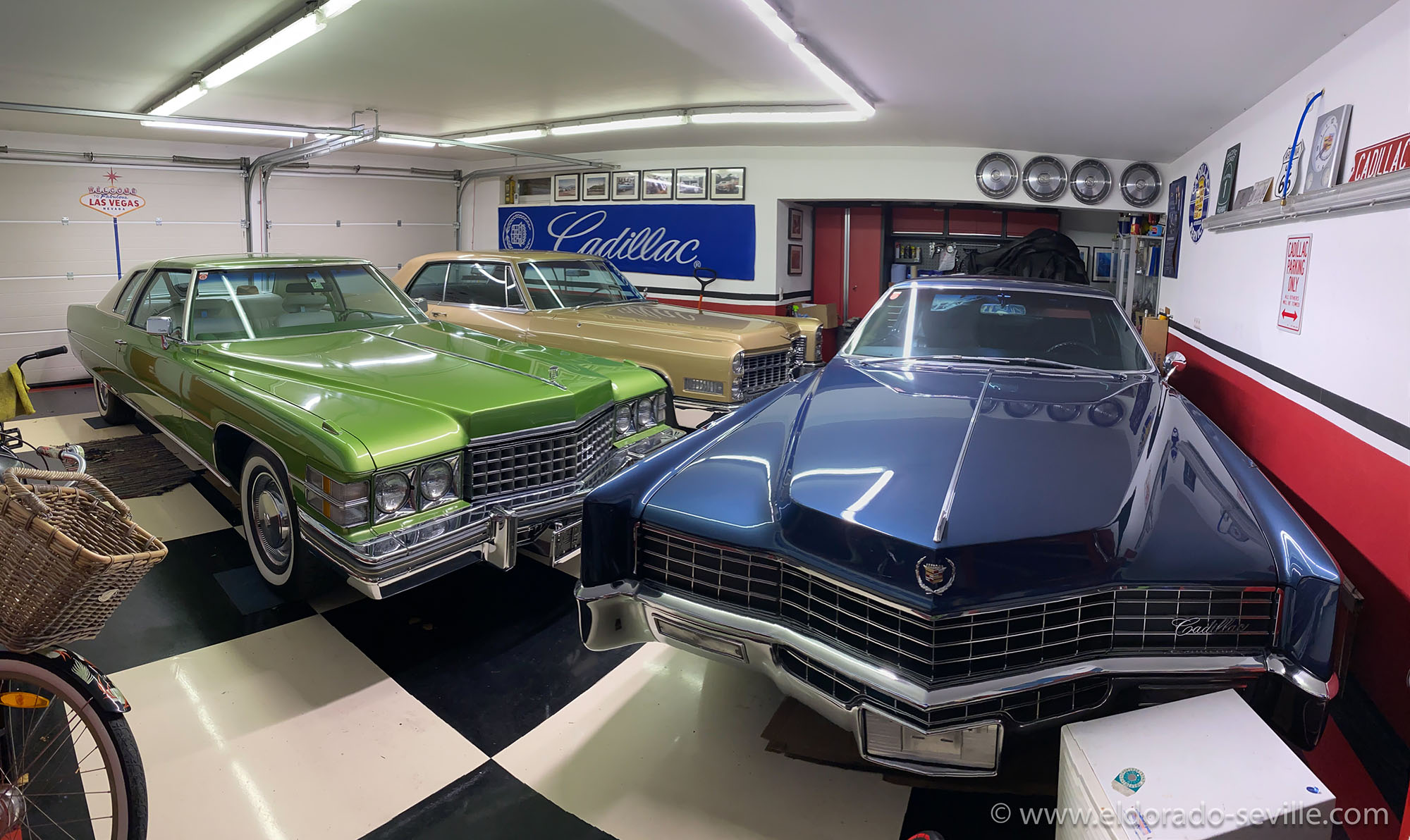 WINTER STORAGE IN A PLASTICBAG?

My Roadmaster lost its garage space in my dehumidified garages and now has to spend winter in my old, uninsulated garage which can get a little humid during the winter months. To make sure it will stay dry, I bought a "Permabag" which seals the car from the outside. It works with BIG desiccant cylinders which will keep the car dry and which can be used multiple times by simply drying in the oven for 3-4 hours every 3-4 months. I took a short video of the procedure, it took me a while to get it into the bag…

Here is a short time-lapse video of putting the car in. The Roadmaster is in the bag for the winter Humidity inside the bag should stay below or around 50% -this is controlled by a hygrometer.

STAMP MODELS is now selling a limited edition 1974 Cadillac Coupe deVille in Persian Lime in 1/43 scale. As it is identical to my car, I immediately had to grab one.
Check your local dealer if you are interested in buying one as well! I normally NEVER drive any of my cars in rain and they never get wet. Last weekend was the only exception as I attended the Cadillac BIG Meet with my 74 Cadillac. It basically rained all the time from Friday to Sunday and the car got really soaked. It took me a while to get everything cleaned up - especially the undercarriage needed a lot of work to shine again. After a couple of hours of elbow grease everything is dry and clean again. I used compressed air to blow out all the water hiding around the vinyl top - a very important step! I am part of the Cadillac BIG Meet organisation team and we had a great 2021 meeting despite the bad weather and all COVID regulations. Only 80 Cadillacs attended this year as it was raining almost the whole weekend with some sunny spells.

My job in the team is to do all promotion work, including the CBM website. Together with my wife we usually do all the photographic and video work during the event and I'm also in the judging team for the awards.
This year we focused on shooting a new movie and produce a lot of video material for future promotion material about the event. Our friend Christian was kind enough to do the photographic work for us this year.

A huge picture gallery is now available here - thanks to Christian Doerk for providing these stunning images!

Here is the official 2021 Cadillac BIG Meet Aftermovie my wife and I produced: Make sure to watch in HD!

A TV report I produced for TV1


My colleagues from Servus TV also had a feature.

ARTICLE ABOUT MY 67 ELDO IN THE NEWSPAPER

A few days ago I was interviewed for a local newspaper about my Cadillac collection and especially about my 67 Eldorado.
The article was published today and came out really nicely. My dear wife shot all the pictures for the paper during a quick photo shooting. GETTING READY FOR THE CADILLAC BIG MEET 2021

The Cadillac BIG Meet is just around the corner.
I will spend the next few days in my garage to clean my 74. Looking forward to a great meeting - despite a terrible weather forecast… The 74 will be perfectly detailed for the meeting as always - inside and out.